The Township of Melancthon 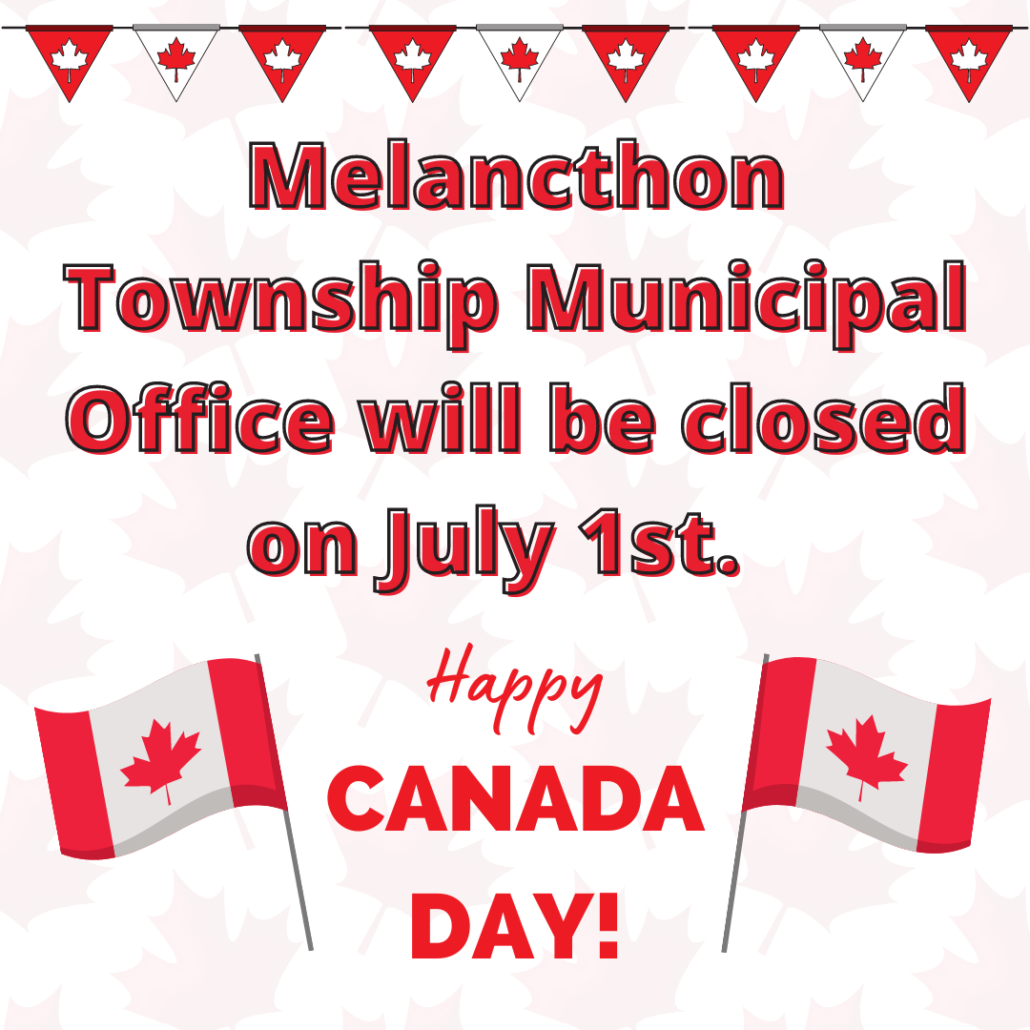 Take Notice that a Public Meeting will be held to provide the public with an opportunity to comment and provide input in relation to Towing Services and Vehicle Storage Yard Facility By-law, on:

Due to the efforts to contain the spread of COVID-19 and to protect all individuals, the Council Chambers at Town Hall will not be open to the public to attend a Public Meeting until further notice.

All persons interested in the above matter are invited to observe this Public Meeting through the Town’s live stream broadcast of this meeting online at www.youtube.com/c/OrangevilleCouncil

Members of the public who have an interest in this matter may:

Written comments may also be submitted prior to the meeting and can be addressed to the Mayor and Members of Council, and/or the staff contact provided below. All written comments received will be taken into consideration through the overall review of this matter and will become a matter of public record.

To obtain a copy of the proposed Towing Services and Vehicle Storage Yard Facility By-law, please refer to the agenda package for the July 13, 2022 Public Meeting, found on our website at calendar.orangeville.ca/meetings

For more information about this matter, contact, Clerks Division, Corporate Services at 519-941-0440 Ext. 2256 or by e-mail at clerksdept@orangeville.ca during normal business hours.

During working hours, traffic will be reduced to a single lane and people can expect approximately a 10 minute delay. All lanes will be open outside of the working hours, as well as on June 30th, 2022 and July 1st 2022. 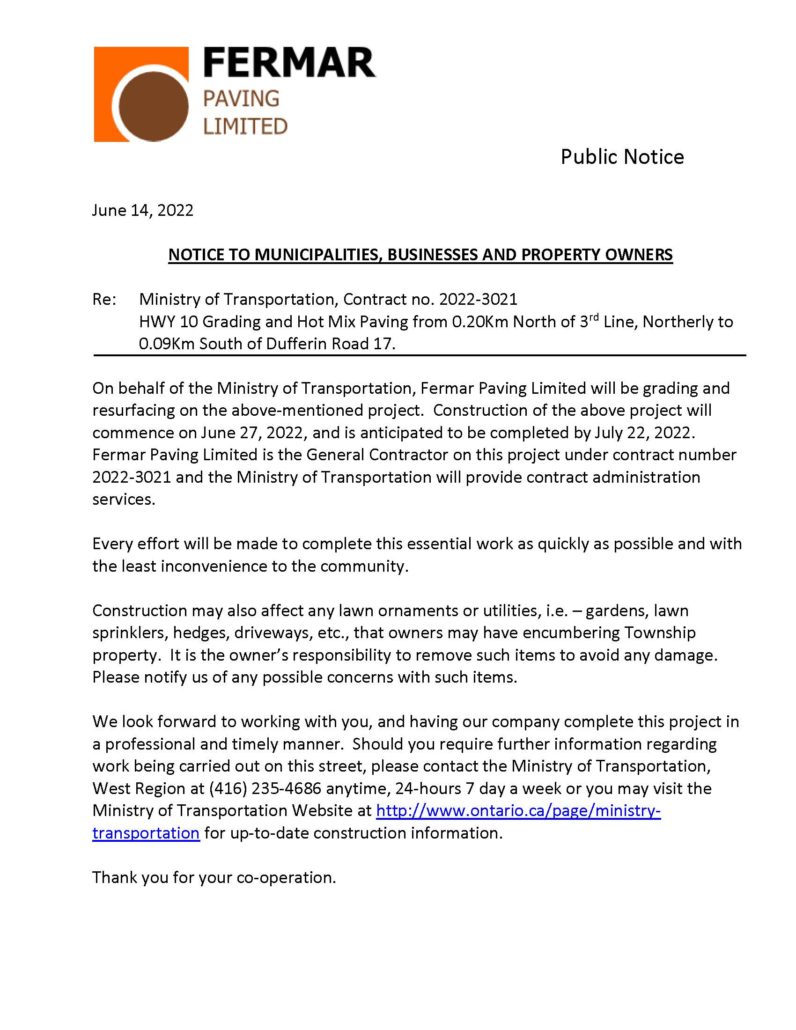 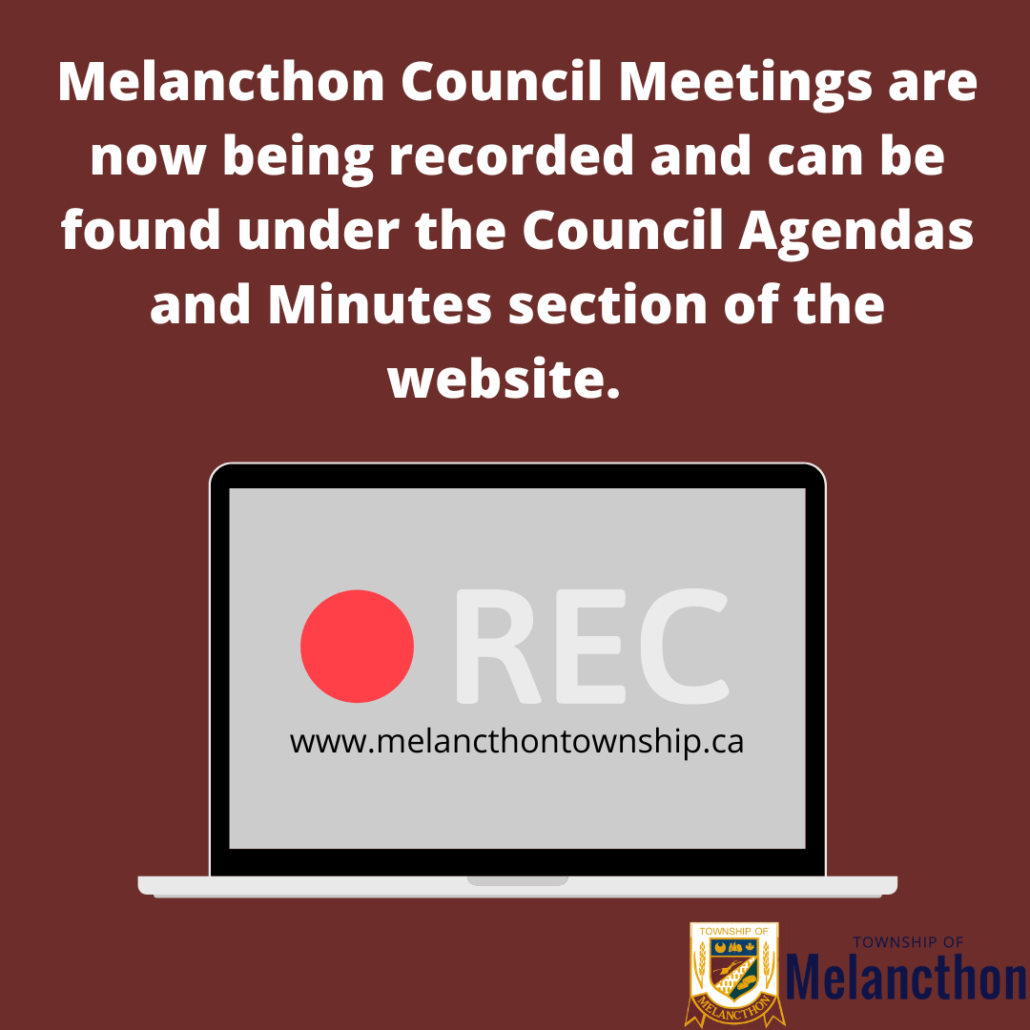 If you are interested in this initiative, please apply in writing to the undersigned providing a brief outline of your background, experience and interest in the Recreation Task Force.  Applications must be received by Thursday, June 30th, 2022 by 12 noon.

Summary of Qualifications, Duties and Responsibilities – Task Force Members must be at least eighteen (18) years of age, a Canadian Citizen, a resident of Melancthon Township and not employed by the Board or the Municipality.  Members will be required to attend meetings and special meetings as set or deemed necessary by the Task Force. 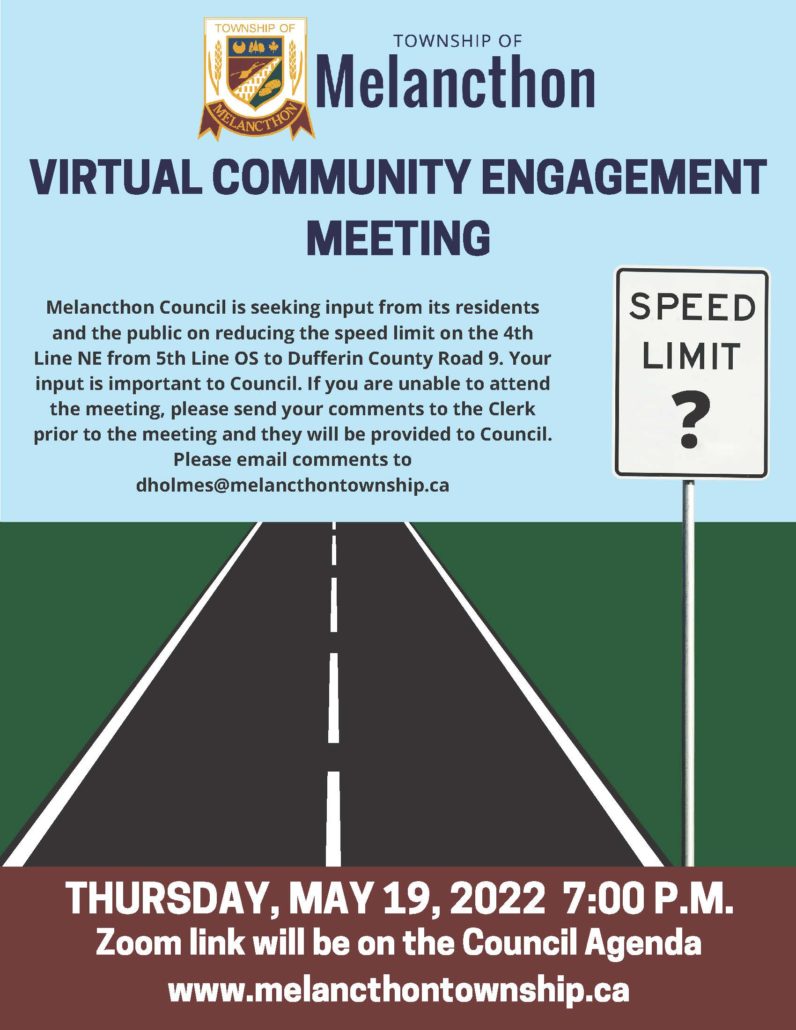 Notice is hereby given that the Council of the Corporation of the Township of Melancthon intends to pass a By-law to amend Section 37 of Procedural By-law No. 16-2015 at the Council meeting on Thursday, May 5, 2022.  The meeting starts at 5:00 p.m.  The amendment is as follows:

Every communication addressed to Council, including a petition designed to be presented to the Council, shall be legibly written or printed, shall not contain any obscene or improper language; and must include the author’s full name and current contact information, at a minimum, the author’s address, telephone number and email and filed with the Clerk. Once received, the communication shall be published in the Agenda package and form part of the public record.  The communication shall be submitted in accordance with Section 16 of the Procedural By-law.

Any communications submitted by the public to be considered or addressed by Council shall form part of the agenda for the appropriate meeting and shall be considered to be a public document and therefore, subject to disclosure.

Any communication within the jurisdiction of a Committee shall first be placed on the Agenda for the appropriate Committee, unless the communication relates to a subject or report scheduled to be considered by Council.

The report provides a progress update on the implementation of the Dufferin Climate Action Plan that was adopted on March 11, 2021.

The Climate Action Report Card identifies the status of each action and highlights the key initiatives undertaken throughout 2021 including:

The following people have submitted Council Vacancy Applications for consideration by Council and their Applications have been certified by the Clerk.

March 7, 2022 – Notice is hereby given that the Council of the Corporation of the Township of Melancthon will be holding a public budget meeting on Thursday, March 17, 2022 at 6:30 p.m. to consider the 5th draft of the Budget with the intent to adopt the Budget at that meeting.

The following people have submitted a Council Vacancy Application for consideration by Council:

A candidate for municipal office must be a qualified municipal elector as set out in the Municipal Elections Act, 1996.  Qualified electors must be:

Any qualified individual may submit, in person with identification, a completed Council Vacancy Application form, along with a signed declaration of qualification, by 2:00 p.m. on Thursday, March 10, 2022 at the following address, 157101 Highway 10, Melancthon, Ontario.

Inquires regarding the Council Vacancy may be directed to Denise B. Holmes, CAO/Clerk – dholmes@melancthontownship.ca or 519-925-5525, ext. 101.

The Council Vacancy Application Form can be found here or can be picked up from the Municipal Office at the above address.

The approved Council Vacancy Appointment Procedure can be found here. 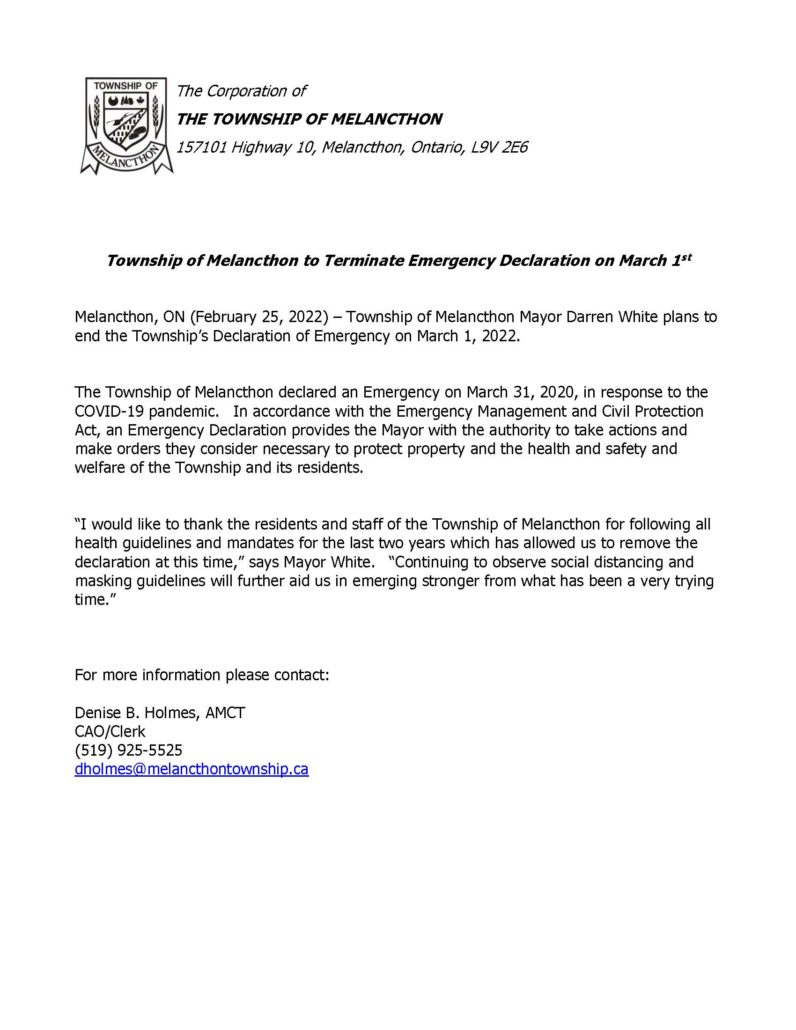 All roads have reopened in the Township with the exception of the 2nd Line SW between County Road 17 and 260 Sideroad, which remains closed until further notice.

The Township of Melancthon is declaring a Significant Weather Event in respect to blowing snow and reduced visibility,  starting at 10:00 a.m. on Saturday, February 19, 2022 and continuing until further notice.

Users of the roads in the Township are advised to avoid unnecessary travel.

The Township will issue a public notice when this Significant Weather Event has ended.

The Township of Melancthon wishes to thank Mr. Hannon for his service and dedication to the Township and to the many Boards and Committees he has served on.

Pursuant to the Municipal Act, Council will declare the seat vacant at the next regular meeting of Council. 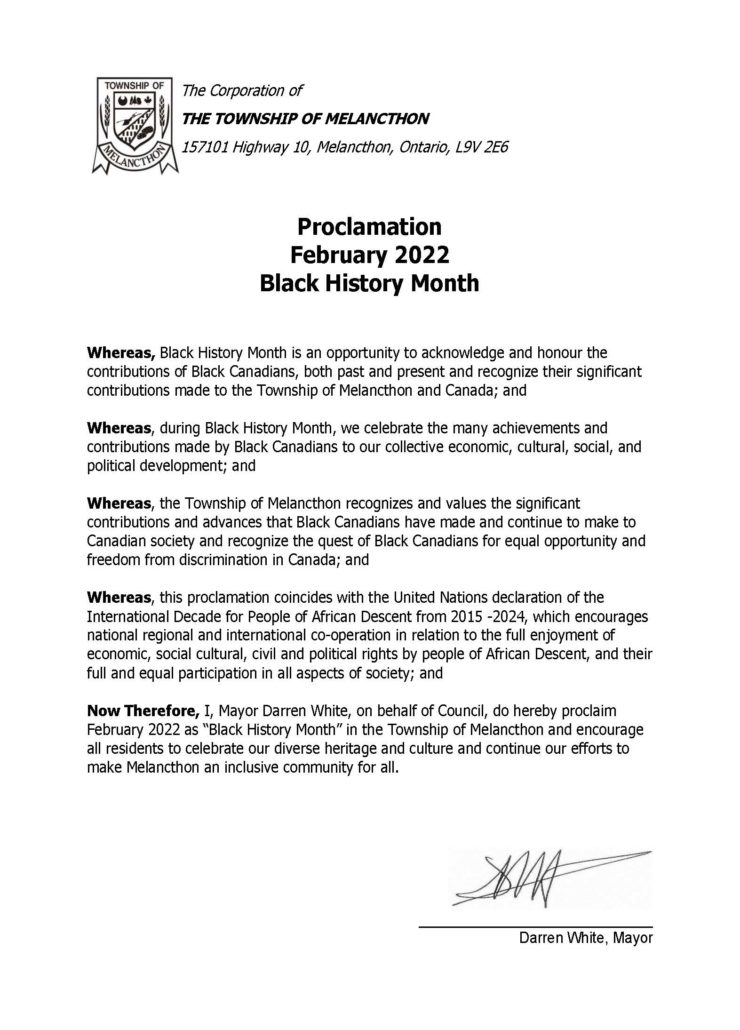 The Township will also be raising the Pan African Flag on Tuesday, February 1, 2022 at 10:00 a.m. with Alethia O’Hara-Stephenson, President & Founder, Dufferin County Canadian Black Association to recognize Black History Month.  The Flag will be raised until Tuesday, March 1, 2022.

Click here for the Notice of Passing and the By-law 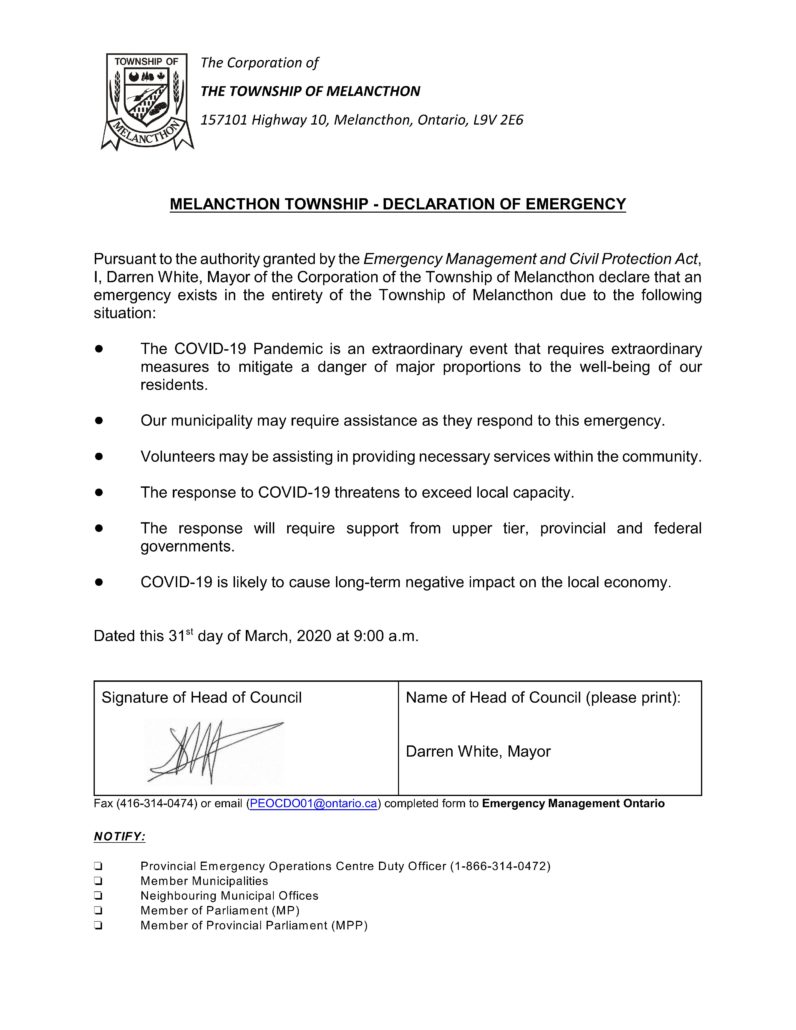 The Council of the Township of Melancthon would like to thank those who submitted an entry for its Slogan Contest.  The contest which ran until September 30, 2016 was open to Melancthon residents, Council Members and Staff.  There were a total of nine slogans received.  The slogans were reviewed at the October 6th Committee of the Whole meeting and voted on and the following slogan, submitted by Denise Holmes, was chosen:  “Preserving the Past ~ Protecting Your Future”.